Michael Dryden is proud to battle on the side of working people, striving to make sure they get the workers compensation benefits they are entitled to when they incur work-related injuries or fall ill to a work-related disease. His work in the seminal case of City of Philadelphia v. WCAB (Sladek), before the Pennsylvania Supreme Court, led to a favorable decision that will benefit firefighters and their dependents in current and future cancer claims. Mike’s earlier work in another case helped to raise evidentiary standards employers must meet when claiming an employee’s known occupational risk for a disease is not the cause of that employee’s illness. Because of his reputation as an authority in the field of law, he was in 2017 appointed to serve on the NFL Players Association (NFLPA) Workers’ Compensation Panel. He is one of only two attorneys from Southeastern Pennsylvania to represent the Philadelphia Eagles players and one of six workers’ 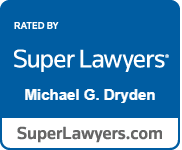 compensation panel lawyers from the state of Pennsylvania.

Mike’s service to clients includes representing them in workers’ compensation and pension matters before the Philadelphia Civil Service Commission. He is actively engaged in the firm’s management of Heart & Lung Act cases throughout Pennsylvania, including occupational disease claims for cancer, heart disease and toxic exposures. Mike’s work has helped hundreds of workers, from firefighters to machinists to truck drivers, claim benefits for all types of work-related injuries and diseases. He has successfully challenged pension offsets that employers claim against workers’ compensation in an attempt to reduce injured workers’ benefits. He derives great satisfaction from securing workers’ compensation and other benefits to which hard-working individuals and their families are entitled under the law. For employees of certain state-run correctional and penal facilities and mental hospitals, those benefits include the protections of Pennsylvania Act 534. Mike counsels clients on the benefits available under Act 534, which provides an additional layer of workers’ compensation protections that exceed those afforded by the Pennsylvania Workers’ Compensation

Act. Mike also has secured compensation for workers whose illnesses or injuries were covered by the Pennsylvania Heart & Lung Act. The Act provides a powerful set of income protections to police officers, firefighters, corrections workers and certain other state and municipal employees who become sick or injured on the job. Some of these workers may be eligible for workers’ compensation benefits as well as benefits under the Heart & Lung Act. Whenever a worker believes that he or she has developed cancer, lung disease or any other illness as a result of job duties, Mike has the knowledge and experience to help.

Mike is certified as a specialist in the practice of workers’ compensation law by the Pennsylvania Bar Association Workers’ Compensation Law Section, one of fewer than 50 such lawyers in Philadelphia, and he serves as the chair of the Workers’ Compensation Department for Willig, Williams & Davidson. He has been called on to testify before state and city legislative bodies on issues involving workers’ compensation, occupational disease and hearing loss. The son of a Teamster, Mike is a sought-after presenter by labor organizations throughout Pennsylvania regarding workers’ compensation, disability, pension laws and related issues. He trains union leadership on issues involving injured members and conducts educational seminars for union stewards, always putting his clients first, working hard to advance his own knowledge and share it with others.

“My father was a truck driver, and a member of Teamsters Local 107; my mother is still receiving a pension that he earned through the Teamsters’ union. That inspires me to make sure that people injured by their work are treated fairly and with dignity.”

“I coached youth sports for years, including the Abington Raiders (football) and the Abington lacrosse club. My youngest son is now a senior in high school, so I’m not coaching right now. I played small college football and high school football and know the benefits first-hand. If you coach, you put it on your calendar and you’re part of a team with your kid. Coaching helps you keep your priorities intact. I can’t wait to have grandkids so I can do it again.”