Rick Poulson is one of the top public-safety union lawyers in the country. The son of a Philadelphia firefighter, Rick has spent more than twenty years advocating for police officers, firefighters, paramedics, corrections officers and other public-safety professionals throughout the United States.

Rick serves as general counsel to a large roster of public-safety and civilian unions, and in that role, he helps unions to negotiate and enforce strong collective bargaining agreements for their members and their families. Through collective bargaining, interest arbitration and the legislative processes, Rick and his colleagues have secured groundbreaking bargaining, safe-staffing, disability and equipment protections for police officers, firefighters, paramedics and other public safety workers throughout Pennsylvania. At the local level, and in his role as legislative counsel to unions, Rick has fought to preserve collective bargaining rights, pensions and retiree healthcare benefits for public-safety personnel, at the bargaining table and in the legislature.

Rick is also adept at directing multifaceted campaigns to obtain legal protections for workers who have become sick or injured at work. The campaigns, involving negotiation, litigation, legislative initiatives and public relations efforts, have benefited a wide range of union members, from firefighters stricken with Hepatitis C or occupational cancers, to police officers forced to don body cameras, to private-sector workers facing the long-term effects of asbestos exposure. He is currently working to secure legislation to establish post-traumatic stress injuries as occupational illnesses for police officers and firefighters, to protect the confidentiality and speech rights of police officers, and to ensure that all public safety workers are paid what they have earned under the Fair Labor Standards Act.

In addition to his busy practice, Rick is a sought-after speaker on matters facing police officers and firefighters in the modern workplace. Rick regularly trains labor organizations, arbitrators and attorneys nationwide on using state-of-the-art methods to protect the rights of public safety workers, and he testifies before legislative bodies on the importance of maintaining strong collective 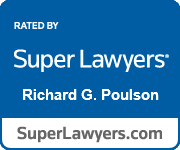 “I’m inspired to work for people who stand up for people. I protect the rights of people who risk their lives to protect others.”

“My wife Jennifer and I like to hike with our dogs—Shae, a Goldendoodle therapy dog, and Charlie, a Labradoodle. I also enjoy kayaking and playing the guitar for my own enjoyment.”